Finally got around to watching Mosul, which I felt shamed into watching after reading this article that declared it “the best Iraq War film ever made.”

It was good. I enjoyed it.

It’s a different kind of Iraq War movie, though. It felt like the ruins of something that came before. It felt like an alternate reality of what would happen if it all went wrong.

I’m not sure that the world recognizes the incredible sacrifice shouldered by young Iraqi men and women in their battle against ISIS. Especially in Mosul. It all kind of happened in the back of the newspaper while we were otherwise distracted.

I especially appreciated the scene below, which captures the absurdity of the whole thing, in a blown-out dark room. The Mosul SWAT team meets with an Iranian Colonel who is in Mosul supporting the ha’shd al-sha’abi – the “Popular Mobilization Forces.”

This is what “strategic competition” looks like on the ground.

Still catching up on the backlog of podcasts. I listened to episode 34 of the Irregular Warfare podcast weeks ago – and jotted down a few notes. This episode was on “China’s Strategically Irregular Approach.”

Before I even listened to it, I opined that there would be a discussion or comment about how “good” China is at irregular warfare and how “bad” we are at it.

The discussion was more nuanced than that, thankfully. But there is one area in which I think we (the US) continue to get a bad rap.

And that’s on the topic of the “whole of society” approach.

In any discussion on China’s approach to competition, their ability to marshal their entire society in lockstep towards their political goals is touted as a huge advantage. A top-down approach, where the CCP dictates the direction, and often the pace and style.

To the outside observer, it can appear as if they’re “doing it well” or “doing it better.”

And what do we have to counter that?

A system that appears (to outsiders and insiders) to be falling apart, constantly at odds with itself, and seemingly incapable of coming together for a common purpose.

If you believe the above and swallow it whole, you’re missing the bigger picture.

The USA already does the whole of society approach – and does it incredibly well.

Here, we trust our people with free speech, to make decisions in their best interests and pursue what makes them happy. This is mission command at a societal level.

We don’t need to tell our people that they need to go out there and counter adversarial aggression. Instead, we provide the space and the means for people and organizations to thrive.

The Marvel Cinematic Universe – an American media franchise – is worth billions of dollars worldwide, but more importantly, carries the power of American culture, creativity, innovation, and humor across the world.

If you’re on the outside looking in, American society, with all its cracks and fissures, is a behemoth. It is worth envying.

Do the right thing, speak the truth, and trust your people.

I’ve seen it, and I can explain it, but I never heard it put that way before.

“I saw the best minds of my generation sent off to divide by zero.”

What he’s talking about is the “GWOT effect.” Incredibly smart and passionate Amerians sent overseas to “win.”

You see it at all levels – from the soldiers on the ground to the Generals in the Pentagon.

If we could just find the right strategy, the right force mix, put the right nouns and verbs in the right order.

If we could have just – one – more – year – we can turn this thing around.

A few years ago, I saw the “GWOT Effect” perfectly captured in the back-and-forth between Brad Pitt and TIlda Swinton’s characters in the 2017 film War Machine. In it, General “McMahon” is briefing a pool of politicians on the strategy to win the war. It’s a brief he is used to giving because he’s done it over and over and over again – to soldiers, to staffs, to politicians, and to the media. He’s good at it. And people believe him. But here, in this one, he is challenged (Note: I couldn’t find the clip, so the dialogue will have to do – source).

German politician:  General, the US invaded Afghanistan because of the al-Qaeda attacks on September 11th. This is correct sir?

German politician: You have been speaking to us now for 45 minutes and yet in all of that time you have only mentioned al-Qaeda once. Your own vice president has advocated a much smaller and simpler counterterrorism approach to incapacitate what is estimated to be a little more than 100 al-Qaeda fighters that still remain in Afghanistan to refocus on what it was that started this war in the first place.

German politician: Your analysis of the insurgency there suggests to me there is no monolithic Taliban.  You are spread over the entire country. You are fighting 1,000 separate battles with locals whose principal ideological position would seem to be simply that they don’t want foreign soldiers in their village. And that, General, you must know, is a war you will never win.

General: Ah. Uh, with all due respect, ma’am. Uh I must beg to differ. I firmly believe, having traveled to all corners of the country, having spoken with many people from many walks of life . . . that what these people want is the very same thing that you and I want. Hmmm?  Freedom, security, stability, jobs.  Progress is being made. Real Progress. But challenges do remain.

German politician: Yes, I understand all of that, General. And . . .and , please let me say quite sincerely that I do not question the goodness of your intent. I have been listening to you here this morning, and, uh. . . I believe you are a good man. I do. What I question is. . . your belief in your power to deliver these things that you describe. I question your belief in the power of your ideals.

German politician: I think what I am trying to say, and I apologize, General, if this is sounding impolite, but I question your sense of self.

General: I appreciate your commentary. I do. But I have a job to do.

German politician: Yes, I understand, And I also have a job to do. And I’m trying to do mine. As an elected representative of the people of Germany, it is my job to ensure that the personal ambitions of those who serve those people are kept in check. You have devoted your entire life, General, to the fighting of war.  And this situation in Afghanistan, for you, it is the culmination of all your years of training, all your years of ambition. This is the great moment of your life.

German politician: It’s understandable to me that you should have, therefore, a fetish for completion to make your moment glorious. It is my job, however, to ensure that your personal ambitions are not entirely delusional and do not carry with them an unacceptable cost for everybody else.

Of course we are going to try to win. That is the task. But there does come a point where it all seems to get a bit out of hand.

There’s another scene from War Machine that captures this idea. It’s a scene lifted almost directly out of the Michael Hasting’s article which the movie is based on. General McMahon is traveling Afghanistan, explaining to troops how to win the war.

A couple of weeks ago the trailer for Billy Lynn’s Long Halftime walk was released.

It has me a little worried.

I’m a fan of the book. I’ve only read it once, but for me, it captures the zeitgeist of “the war” better than anything else I’ve read or seen.

The trailer, though, seems to be indicating that this is not going to be that. 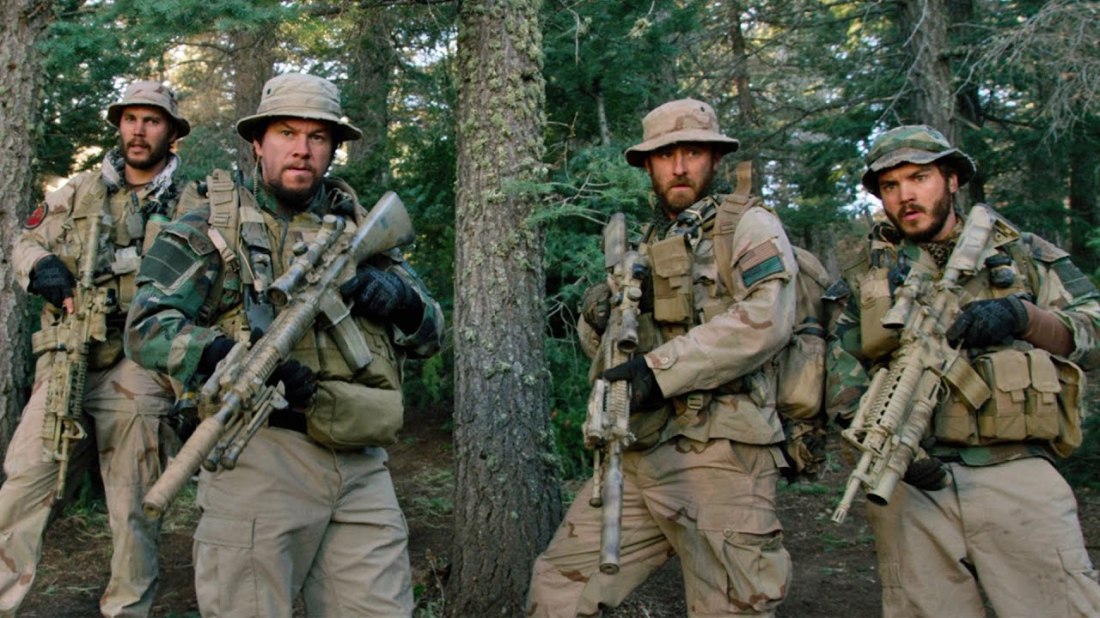 Lone Survivor is coming out this week. If you want a review or analysis, go over to On Violence. This is their show.

There are a few things, however, that I would like to say about it.

First, the trailer is really unsettling to family members of anyone who has someone currently deployed or will soon be deploying to Afghanistan.

I spent a good portion of my holiday leave cringing around family when the trailer would come on. I go to the movies a lot, and saw the trailer three or four times in the theater over the past month and just about as many references on television. For most of the movie-going audience, I imagine that the trailer hints at the possibility to escape, as in, escapism. Going to the movies is a place to escape from reality, even if they are escaping to the war in Afghanistan.

But what if you are one of the few that actually goes to Afghanistan? That’s not escapism. It’s more like voyeurism for the masses. A safe way to experience something terrible.

More so than Zero Dark Thirty, Lone Survivor gets the seal of authenticity. Marcus Luttrell wrote the book that the movie was based on and he played a role in making sure some of the details were right. It’s his story, and a true story, so how can it be criticized?

Is Lone Survivor the Green Berets of the Afghanistan war?

There have been a number of Iraq War movies over the past ten years. With the exception of the critical acclaim The Hurt Locker received, most of them have done pretty poorly. I can’t even remember a single war movie about Afghanistan, unless you count Zero Dark Thirty.

Now, here we are. A big-budget Hollywood movie that is being marketed as “the best war film since Saving Private Ryan.”

It makes me think back to another movie that came out during the war it depicted: The Green Berets. That film, featuring John Wayne, was released in 1968 at the height of the Vietnam War. It is criticized as being insanely pro-military and simplistic in nature. In defense of the film, John Wayne said his “motive was to glorify American soldiers as the finest fighting men “without going into why we are there, or if they should be there.” His “compulsion” to do the movie was based on his pride of the Special Forces, determined to show “what a magnificent job this still little-known branch of service is doing.”

Lone Survivor’s tagline is ‘Live to Tell the Story.’ In press, Marcus Lutrell says he feels like his job is to get the word out about what these amazing men accomplished.

According to Metacritic, the film is getting average or mixed reviews. My sense (having not seen it) is that this isn’t our Full Metal Jacket, or Platoon, or Apocalypse Now. This is another Black Hawk Down. This is big budget. This is Hollywood. This is The Green Berets.

This isn’t the Iraq/Afghanistan war movie I’ve been waiting for.