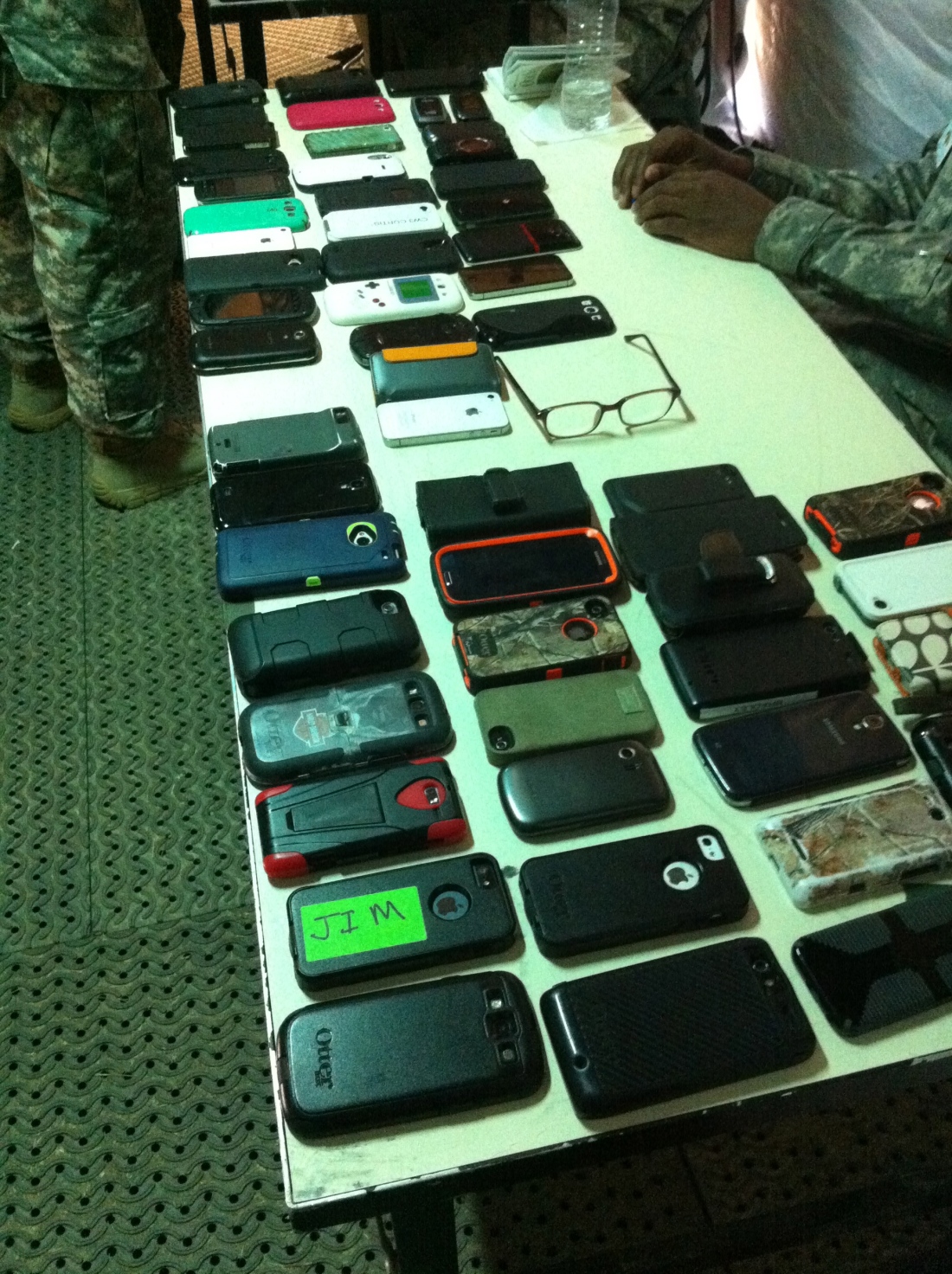 But today, in an era where the PL spends much more time managing personalities and painting a picture for higher than analyzing terrain or calling for fire, it’s hard to argue that there is any tool more useful than the smartphone. Instant communication, regulations at your fingertips, emergency GPS, calendar and task management – all combined to provide a powerful tool for the modern platoon leader.

It’s the camera, though, that makes the smartphone invaluable today.

When I first joined the Army in 2001, NCOs and officers bemoaned the recent intrusion of email in their daily lives and longed for days when they had regularly scheduled meetings and if they needed something, they just sent runners. When I got out in 2006, I was just beginning to see some of the more senior officers carrying around BlackBerry’s, furiously tapping out emails between events.

The iPhone wouldn’t be released for another year.

Without question, the most striking thing about the way the military has changed since I got out (2006) and when I rejoined (2011) is the prevalence of the smartphone. Just about everyone has one. And the scourge of NCOs everywhere are soldiers sitting around on their phones, tapping away at games, text messages, or social media.

In the good old days, soldiers just sat around.

As an aside, a significant decision that leaders have to make today is whether or not they will allow soldiers to bring their phones with them to the field during training. I’ve seen some leaders allow them and others outright ban them, going as far as conducting inspections and recommending Article 15s for soldiers caught in the field with them. Some might scoff at the notion of being allowed to bring smartphones to the field at all, arguing they have no place in training. Others might think banning them is overbearing and not taking into consideration changes in society. Interestingly, on the modern battlefield, many leaders and soldiers have cell phones with local voice and data plans.

Anyway, the fact that everyone has a smartphone and the effect this has had on work, relationships, and the like, and whether that is a good thing or a bad thing has been written about elsewhere. Here, I want to highlight its effect at the small unit level, in this case, the platoon leader.

Just as conducting classroom training and briefing has shifted to using PowerPoint as a default, the rapid proliferation of digital cameras – and especially smartphones – has resulted in documenting events with images as a near-requirement.

Stated another way, if training occurs, but no pictures were taken, did training really happen?

The “pics or it didn’t happen” adage has been unofficially adopted by Army leaders everywhere. In a media-saturated environment (and the military is just as media-saturated as anywhere else), pictures are the best way to rapidly highlight what’s going on to a higher headquarters. Leaders respond to subordinate leaders’ elaborate training plans with “Sounds great, make sure you get some pictures.”

In the past, if a leader wanted to capture images of an event, he or she would have to get a camera, usually through PAO, combat camera, embedded journalists, or some other coordination. If they were lucky, they might have a guy in the platoon with a camera and willing to expend some film. There was rarely a requirement to capture training events on camera because it just wasn’t practical.

The fact that just about everyone has a smartphone today significantly lowers the bar, and capturing images is now generally expected. Not only is capturing the event in a picture important, but capturing it and quickly getting that image to higher has become paramount.

You’re only as good as your last storyboard.

With this, there are all sorts of pitfalls, operational security (OPSEC) being one of the chief concerns. It is easy to carelessly snap a picture that might contain something considered secret or confidential, which can rapidly become a significant emotional event for all parties involved, especially if the image is transferred to other devices or posted online.

There’s also the great annoyance of sending up pictures only to have them torn apart by an eagle-eyed NCO looking for uniform deficiencies or other violations.

You can send up a photo of a soldier standing over the still-warm body of Osama bin Laden, but let that soldier’s eye protection be sitting on his forehead and watch as the wrath of Hades comes flying your way in the form of a nasty gram.

And of course, the dumb things that soldiers do are now routinely captured in pictures or video and shared with the world.

While these developments may seem strange to some and terrible for the force in the same way people curse PowerPoint, these changes are not necessarily bad – just different. The landscape is changing, and the way wars are fought is changing. Just look at all of the wild pictures in the ISOF Gold series I’ve been running. While some of those photos are goofy, there is an effect that they have on the populace – by sharing candid photos of Iraq’s elite forces at work, a message is being sent that their security forces are out there. And when they conduct an operation, they make sure to take out the camera phones and start snapping pictures.

During our initial inbrief at IBOLC, the battalion commander read off a list of ten things (I think it was ten) that would help us be successful officers in the Army. Some of them were pretty basic, like be in good physical shape and try to get enough sleep. I dutifully copied down the notes, but became particularly interested when he said “Number 8, always have a ‘capture device.'”

I straightened up and craned my neck to listen.

Around the time I was getting out of the Army in 2006 and starting college, I became super-interested in all things “productivity.” I read all the blogs and articles and theories. I created my own monster of a “getting things done” system that I still follow and tweak today (a post for another time).

So when he mentioned something that sounded like it might fall into that realm, I found myself listening intently.

He went on to talk about how good ideas often present themselves at random and inopportune times, and without a “capture device” they will simply disappear.

A capture device can be anything, from a simple pen and pad to an App on your iPhone (I use Things, and to a lesser degree, Evernote).

It is some of the best advice I ever heard, and my feeling is that it was lost on most the young Lieutenants sitting in the room.

Did you ever notice that you’ll often have fantastic ideas while in the shower or during exercise? There’s a bunch of scientific reasons why that happens. When Don Draper is stumped on an idea, he goes to the movies and lets his brain rest.

By the time he leaves, the idea is there waiting for him.

Only in real life, if you don’t have a place to “capture” that idea, you’ll find yourself stopping in your tracks hours later, staring at the floor with an outstretched index finger and scrunched face, trying to remember what it was you wanted to do.

When I get an idea for work, social life, a gift, this blog – anything – I will stop what I’m doing and go to my “capture device,” in this case, my iPhone, and capture it quickly, usually in just a couple of words, and then revisit it later. The idea for this blog post came after I got an idea for another blog post and went to my phone, realizing that it would also be interesting to write about that in the first place!

Those “good ideas” only last a few moments before I forget them, usually because I’m caught up in something I’m enjoying, like watching a movie or exercising. Without capturing them, I am essentially letting them pass, hoping they’ll return at a later time when I’m not so engaged – unlikely, says science.

Over time, I’ve collected lots of great ideas for ‘things,’ most of which amount to nothing, or sit in an ever-growing list of things that I may one day do. Others, though, have been fantastic and led me down paths or allowed me to do things that I never thought I would do. That is why I almost always have my iPhone with me.

It is my capture device.